Blaska has a gun and likes the Tea Party!

He’s just not that into Batman.

The Squire of the Stately Manor does not like to employ the term “lamestream media.” Overused and facile. Truth is most of us bloggers rely on the professional news media for our primary source material, although yours truly has been known to break a story or two on his own.

The Blaska Policy Research Center and Herpetarium pays precious money for the online and/or in-print editions of The Wall Street Journal, Wisconsin State Journal, The Capital Times, Milwaukee Journal Sentinel, Weekly Standard, The Atlantic, Car & Driver, Smithsonian, and the NRA’s American Rifleman. I purchase the Sunday New York Times at my favorite coffee shop on Monroe Street. I am likely the only conservative in the place.

But in the aftermath of the horrible massacre at the Colorado movie theater, is there anything more “lame” than Friday morning’s ABC News report?

Of course, the Tea Partying James Holmes had nothing to do with the shooting, anymore than the Gabby Giffords shooting in Tucson, Ariz. Or Fort Hood. Or Virginia Tech. Or … well, you get the idea.

The Blaze, one of the new online media outlets challenging the old-line news media, asks, “What kind of idiot makes that statement?” 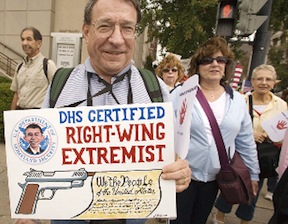 A Tea Partier by any other name

The delightful James Taranto at The Wall Street Journal notes that there are 36 folks named like him, including a thug and a priest, of which, he assures, he is neither. More troublesome, there exist 2,909 James Holmeses in the U.S.

Ross pointed the finger at an innocent man based on nothing but the coincidence of a common name and the man's residence in the same city of 325,000 where the crime took place.

… There was one other factor, and this is what makes the ABC error not just amateurish but sinister: the innocent Jim Holmes' involvement with the Tea Party. For more than three years, liberal journalists have falsely portrayed the Tea Party as racist and potentially violent. After the January 2011 mass shooting in Tucson, Ariz., speculation immediately began that the suspect was a Tea Partier. Even after it was proved that he was not, The New York Times published a despicable editorial blaming conservatives anyway.

If ABC News “reporter” Brian Ross had found a James Holmes of Aurora, Colo., whose Facebook page boasted that he was a member of the Sierra Club, or the Democrat(ic) Party, or Occupy This or That, or Phi Beta Kappa, or – for that matter, the Batman fan club – do you think he would have reported it? No, that would be “edited” out.

All the bias that’s fit to print

The liberal bent of the news media is not an undigested bit of meat roiling the imagination, as it did old Ebenezer, of the Vast Rightwing Conspiracy. It has been empirically proven.

The University of Connecticut’s Department of Public Policy surveyed 300 journalists nationwide – 120 who worked in the television industry and 180 who worked at newspapers – and asked for whom they voted in the 2004 presidential election. In a report released May 16, 2005, the researchers disclosed that the journalists they surveyed selected Democratic challenger John Kerry over incumbent Republican President George W. Bush by a wide margin, 52% to 19% (with 1% choosing far-left independent candidate Ralph Nader).

You want biased story selection? How about this Page One of the Sunday New York Times: “At 40, Steering the Right's Vast Money Machine."

Sidelights: There’s an intriguing website called HowManyOfMe.com. There are only three with my name. How many with yours?

The governor of Colorado made a wise comment on the Sunday TV talk shows. If a bright guy like James Holmes had no access to a gun he would have made a bomb.

If just one of those patrons at that midnight movie had been carrying a concealed weapon, do you think 12 people would have died and another 59 would have been injured?

Not much has been said about the perpetrator’s parents, but I feel sorry for them, as well.

Bruce Murphy made his bones in journalism when Michael Corleone was dating cheerleaders. But the guy has a serious liberal bias. (Me, I’m conservative.) How else can anyone write, as Bruce did in the July 19 Isthmus, “The prospect of Wisconsin having two multi-millionaire businessmen as senators likely has Bob La Follette rolling over in his grave.”

That a “trained journalist” could walk right past that blind spot, that it could squirt through whatever editing process exists at Madison’s alternative weekly, the liberal bias speaks volumes. It’s the old shibboleth: Republicans = party of the rich. The truth, of course, is that Republicans are the party of the strivers. Democrats, the party of the redistributionists. Yes, Murphy was writing an opinion piece. Is it his opinion that Herb Kohl is not a multi-millionaire ex-businessman? 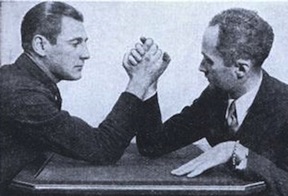 We’ve heard about being mugged by reality. It’s how liberals become conservatives. Now, Eric Hovde was “strong-armed” by Jim Doyle! I told him to stay out of that neighborhood after dark! The U.S. Senate candidate, a Republican, told Charlie Sykes on his Milwaukee radio show last Friday:

Yes, in 2005 I gave a contribution, a very small contribution probably done because I was being hit up and strong-armed by Doyle. I'm a big property owner in downtown Madison, and Doyle would always strong-arm the real estate community every single year for contributions. I am sure one year one of the guys came in and, you know, a real estate developer or landowner and said we have to give money to Doyle, and one year I capitulated.

Reminds me of the great Democrat(ic) crook Chuck “Do we have a relationship?” Chvala, if you get my drift. And I think you do.

I like how Penn State took down the Joe Paterno statue. Whether it was the right decision or not, they took it down first and announced it later. No fuss, no muss. They also seem to have removed the four bas-relief football players emerging from the granite behind JoPa. Would have left them. That, in itself, would have made a statement.

What is an institution’s self-regard when such a famous personage, so much of the warp and woof of the place, is knocked off his pedestal? Russia is having that debate with what to do about the preserved remains of the criminal Lenin.

Looks like it could rain the rest of the week. When will we get relief from the rain?