Over the past week, I have been debating one Jeff Simpson over at Forward Lookout, the Progressive Dane-inspired blog site he shares with Madame Brenda and Lukas Diaz. Jeff is an appointed member of the Monona Grove School Board, a defender of teachers unions, an opponent of parental school choice, and a reliable messenger for ever-higher school spending. (Last spring Simpson testified during MG school budget hearings in favor of a $13 million hike in MG school district property taxes.)

I highlight this discourse as an example of the “one-size-fits-all” mentality that controls the education establishment, which is resistant to educational reform. It is a command-control philosophy one would have thought discredited at the fall of the Berlin Wall.

What follows is my “call and response” to Simpson’s Spring Primary blog, which you don’t really need to read to get the drift. You may notice his predilection for conjuring dark and sinister motives for people with whom he disagrees, including (toward the end) veiled accusations of racism most foul. (Spelling and punctuation unaltered.) 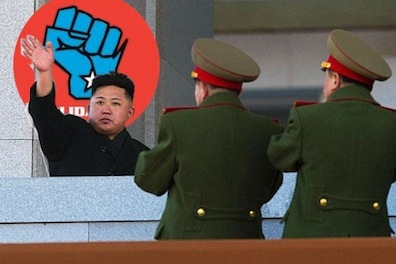 You referenced Scott Jensen as “convicted felon Scott (Scooter) Jensen.” On top of that mistake (if that is what it was) you now add dishonesty. Jensen’s felony conviction was overturned over 2 years ago, which means (by law) the convictions never happened.

I wrote “heaven forbid” public schools should have competition as a sardonic description of the typical Madison “progressive” attitude. Yes, open enrollment exists. As I’ve written elsewhere, over 1,000 Madison school district students are taking advantage of it. Which means their tax-support goes with them — to another public school. Would you join me in working to expand that program, Jeff? No? Even so, in order to take advantage of open enrollment, the student has to travel out of town.

How about an in-town alternative? How about letting the people decide — not the Green Party or Progressive Dane or MTI or the Dane County Democratic Party — but each parent?

And yes, another alternative exists: private schools. Over 4,000 students in the Madison district take advantage of that choice. But first their parents have to pay the public school district. Old Daddy Warbucks could only dream of a business model that sweet!

Jensen was convicted, unfortunately for the people of WI he never served his well deserved time in prison since he was able to delay until he found a right wing judge willing to compromise his values and let scooter off. As i pointed out in the story, despite the fact that he spent tens of thousands of dollars of taxpayer money he was still found guilty and became a convicted felon.

I would love to join with you to increase school choice. In Monona Grove I think we get the most kids who leave from Madison. Would like to expand that. Will you join with me to get us an extra 20 million dollars to build a new school so we can fit them? what if we promise to keep all jobs in WI(i know that goes against Walker policy)? Just think if the state were to give us $20 million to build a new school of all of the jobs we could create, and unlike the WEDC money you could see right where it was everyday.

Anyone can feel free to send their kids to any private school they want. I hear Madison Edgewood is top notch, just dont use taxpayer money to do it! Public money for public education. Its that simple of a concept.

The current republican party has taken local control and choice away from everyone in the state so dont whine to me about it…talk to your buddies at the Capitol!

Cliff’s Notes for the slow learner: You wrote in the present tense about Scott Jensen being a convicted felon, not in the past tense. That is dishonest. If MG can attract enough Madison students, their state dollars will follow them to MG and you can build your school. The locally elected school board runs the public schools but now you want them to run the private schools, too? How about if the school chosen by the parent is accountable to the customer? Why are you afraid of school choice? Afraid parents won't choose the tax-coerced monopoly? That is the ultimate LOCAL CONTROL.

Now, Jesse Jackson Jr. — THERE is a convicted felon.

The money follows the students but nowhere near enough to educate them correctly much less build buildings.

I just want the ability to have accountability. if you take a nickel of public money then you have to have the transparency of a local school board. The customer is We The People. Education is part of the commons.

Like I said there IS choice, if you dont want to do open enrollment, you can CHOOSE to help out in the classroom, Volunteer to help with fundraisers etc…help the school get more funding so that they can offer many more learning options to the kids! Need more choices let me know….when was the last time you spent a day in a local school?

Simpson: see me after school. Your dishonesty on the convicted felon issue taints everything you say. By your logic, once convicted, the lethal injection should proceed regardless of exculpatory evidence that exonerates him. A higher court ruled that Scott Jensen did not commit a felony.

As for judge shopping, the state supreme court ruled, unanimously, that the retrial should be held in Waukesha County so the man could be judged by a jury of his peers. That you need to make your point by falsely denigrating others is telling. Your guilt by association libels all the little minority children in Milwaukee taking advantage of school choice as “criminal.”

As for your “choice,” it’s very much like Henry Ford’s Model T: any color as long as it is black (i.e. the public schools). Understand this, Simpson: the end goal, the purpose, the prize is NOT public schools. It is educated children. Let a thousand flowers bloom.

NO the end prize is privatized schools so you can profit off of them. I know it and everyone else knows it. Do you think anyone really believes that you or scott Jensen or brian schimming care if [CAUTION, readers: CHARGE OF RACISM AHEAD] the kids on Allied drive get an education or not??? we all know the answer.

We know your motives Dave, its plain for the world to see which is why there is such strong push back!

You elevate paranoia into an art form, Simpson. Jeff, you don’t have any answers, only hobgoblins haunting your imagination.

Do I care if the kids on Allied Drive get an education? YER DAMN RIGHT I DO (if I may channel Ms. Tammy Baldwin). But they aren’t now, are they, Jeff? Or is Kaleem Caire of the Madison Urban League a liar? If those children were getting a good education, they could escape poverty and contribute to the community and lead satisfying, happy lives instead of being generational victims dependent on the good graces of liberal handout programs. BTW: In your list of villains, you forgot that rapist and pillager Bill Gates, who is spending billions of his fortune on school choice because he wants to assure functionally illiterate customers for his high-tech products.

Finally, you don't know anyone’s motives, Jeff. But if you want to play that game, I must caution you that I can give as good as I get.

Sorry Dave, Nice try. Please do not sit there and support the perpetual dismanteling of Public education and then tell me how much you “care”. It is as disingenuous as it is when Scott Walker tells us he wants thousands to be without healthcare because he “cares too much”.

You do not care a thing about the kids on allied drive or on University or even in Middleton. If you want to close the ‘Achievement Gap’ the first hing you do not do is cut $1.6 Billion from education. But you know that.

Motives are not hard to figure out….Scott Jensen has spent his whole career fattening his own wallet on taxpayer money so why would he stop now? It has been so successful for him.

Arent you one who has a sweet cushy state pension that wants to deny it to others??? Could it be because you have outworked every other state employee or could it be just greed? Maybe you can answer that one….. When is the last time you or Scott jensen actually stepped foot in a public school.

Alright, Jeff, you asked for it. I’ll go to motives, since your pretend to divine motives. You are a good liberal who is more interested in shilling for organized labor to protect its stranglehold on “public education.”

Governor Walker had nothing — 0 — to do with the appalling achievement gap among Madison’s minority race children.

When a gifted young black man named Kaleem Caire proposed a charter school (a public school, btw) specifically designed to address that gap, the teachers union shot it down, with Jeff Simpson’s blessings. Only reason: it would be non-union so the proposed Madison Prep could go above and beyond the collective bargaining agreement and have the flexibility to operate without being tied down by hundreds of pages of union work rules. And what is Jeff Simpson's proposal? … still waiting.

Meanwhile, the Dane County Democrat(ic) Party goes nuclear on school board president James Howard for supporting Madison Prep. Now, you dishonest thug, point to where I have attempted to “dismantle” the public schools? I am merely advocating there by some competition for the statist monopoly. And no fair saying you can choose Apple’s iMacs as long as you first pay Microsoft. I support the most local of controls — the dinner table. You would deny those parents that choice so that your monopoly will endure.

And you call ME selfish!

Postscript: I regret calling Jeff a “thug.” Still waiting for his proposal. Kaleem Caire called out the Madison school district on its minority student achievement gap in late 2010, wherein less than half of Madison’s students of color graduate – BEFORE Scott Walker was even inaugurated! I should have noted that the Urban League’s proposed Madison Prep would have been a public school operating as a non-instrumentality charter school.

For extra credit: The mysterious working of individual choice and an unfettered marketplace: From The Daily Page, this account of the UW Teaching Assistants union: “Union membership has … dwindled. [The union president] says the union currently has about 650 members, down from 2,000 before Walker took office.”