A rising tide lifts all Badgers

A lot of different things come to mind when you think of Wisconsin. The Packers, cheddar, the Brewers, Colby, the Badgers, Gouda, the Dells, havarti, Whistling Straits, Asiago, the House on the Rock, Parmesan.

For some reason, unlike our fellow Americans on the East and West coasts, not many cheeseheads identify our ports or the fact that we are surrounded on three sides by water as one of our state’s distinguishing traits.

Sure, it’s not uncommon to hear us talk about being from the Great Lakes region. And you don’t have to be a complete geek to know Wisconsin’s history is all about fur traders settling along our waterways. But we don’t seem to identify the Great Lakes and the mighty Mississippi as integral to today’s Wisconsin the same way people from, say, California or New York identify with being from the coast.

Is that because we don’t think of the Great Lakes region as a formidable economic player like the East and West coasts are? If so, we would be wrong. According to the Brookings Institution, if it were to stand alone, the Great Lakes economy would be one of the largest economic units on earth, with a $4-$5 trillion gross regional product.

In Wisconsin alone, we have 29 commercial ports that handle more than 40 million tons of cargo valued at over $8 billion. They generate over $1.5 billion in economic activity and almost 10,000 jobs. Those are all big numbers.

Take Joy Global of Milwaukee. Joy Global is a major player in the world mining scene. Among other things, it makes those gargantuan shovels used in mining. Check out the picture below. Before you think those might be Legos, take a look at the two guys sitting inside one of the shovels. 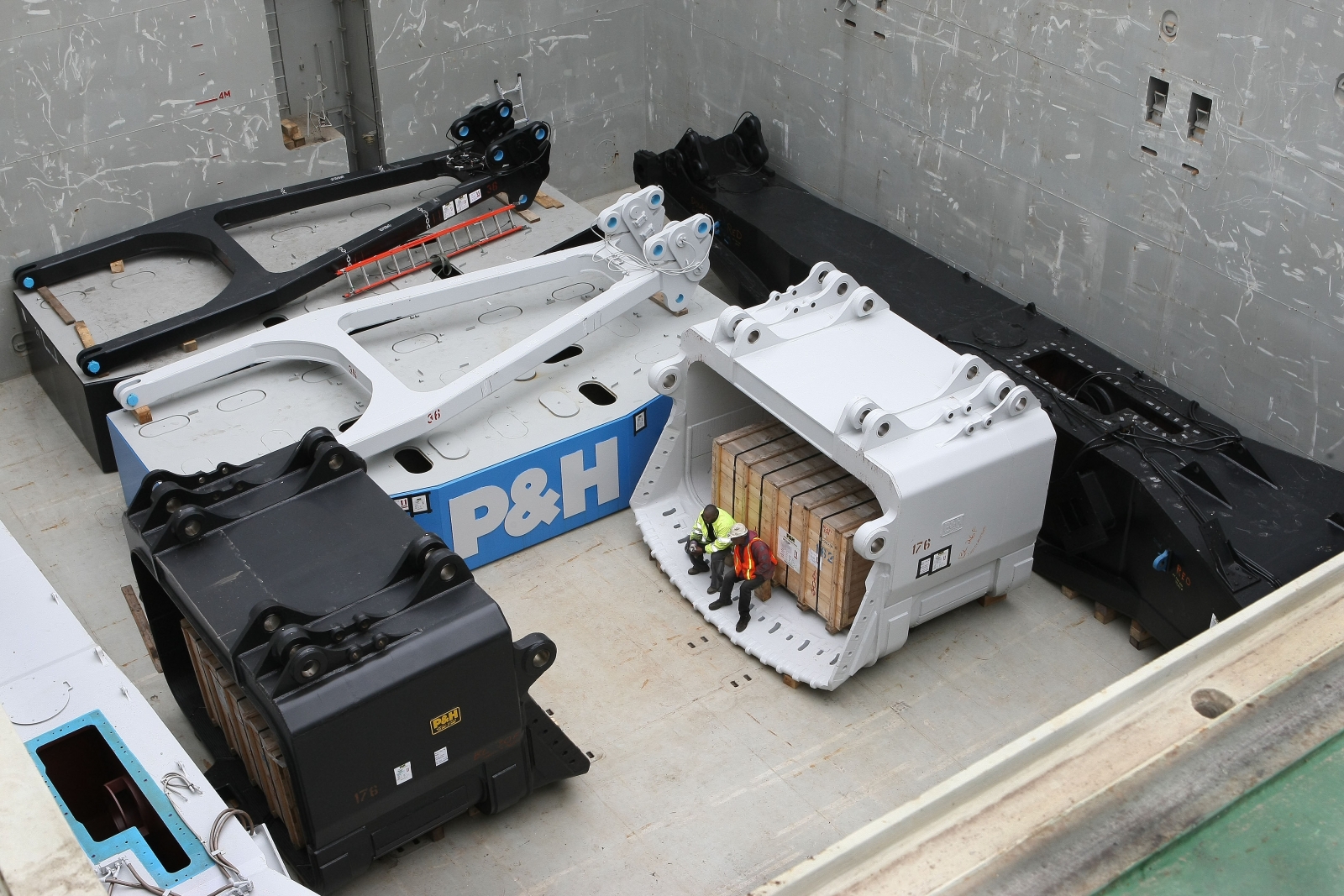 Shovels like the ones in this picture used to extract mineral sources like coal, copper, gold, and iron ore are heading out of the port of Milwaukee on their way to the likes of Siberia and other destinations. Caterpillar and its predecessor companies are also a major player in the worldwide mining industry. John Disharoon, vice president of industrial relations for Caterpillar Global Mining, says, “Given the size of many of our structures, we rely on the port of Milwaukee to handle these shipments to customers around the world.”

Our ports are not only key for these historic businesses in Wisconsin, but for emerging ones as well. Wind energy is a great example. Wind energy suppliers saw a strong demand for equipment at the end of last year and beginning of this year, but it is uncertain whether Congress will extend the wind energy tax credits that are set to expire Dec. 31, leaving the U.S. market shaky at best. But a mover and shaker in wind energy, Broadwind, feels it is in a great position to take advantage of international markets because of its Manitowoc factory (formerly known as Tower Tech). Canada, particularly Ontario, is projected to be a key emerging market. Broadwind CEO Peter Duprey says, “Our Wisconsin facility on a deepwater port is strategically positioned” to produce towers for the Canadian market.

There are stories like this all across Wisconsin in places like Green Bay and Superior. Actually, the Duluth-Superior port is our biggest.

Of course, one of the things that comes to mind as soon as any of us think of Lake Superior is “The Wreck of the Edmund Fitzgerald.” Ah the ol’ Gitche Gumee. You can just hear Gordon Lightfoot singing it, right?

The ship was the pride of the American side
Coming back from some mill in Wisconsin
As the big freighters go, it was bigger than most
With a crew and good captain well seasoned
Concluding some terms with a couple of steel firms
When they left fully loaded for Cleveland
Then later that night when the ship's bell rang
Could it be the north wind they'd been feelin'?

Well, moving this big stuff on these Great Lakes is still no run-of-the-mill job. In fact, the History Channel has a new series on Thursday nights called Great Lake Warriors – Man and Nature Tug It Out (check out this link if you haven’t yet seen the series). It follows several tugboat captains from Wisconsin and the region as they move huge loads in and out of port.

For those of you who have seen The Deadliest Catch, the recently debuted Great Lake Warriors is similar – but rather than taking place out on one of the great oceans, all the action is right here on waters familiar to us. (By the way, the theme song is set to the music from “The Wreck of the Edmund Fitzgerald.”) When you watch these little tugboats pulling loads behind them that weigh 1,500 tons, you realize that these guys are nuts. Talk about the tail wagging the dog. But that’s what makes compelling TV, right?

The point is, ports in Wisconsin are a huge part of our history, but also play a much bigger role in today’s economy than most of us realize. So, we here at TDA are on a mission to move our ports and waterways up – way up – in the collective consciousness of our fellow cheeseheads. The Wisconsin Department of Transportation (DOT) and Gov. Walker agree. We have partnered with them to celebrate the week of Aug. 20-26 as Wisconsin Ports Week.

Click here to see Gov. Walker’s proclamation declaring the week. Take a read, watch Great Lake Warriors, throw a Tombstone Pizza in the oven, crack open a Miller Beer, sit back, and take pity on all those poor landlocked states that will never have what we have.