A progressive, a Democrat, and a union boss walk into a recall bar …

… and order a hangover straight up because they can’t afford any booze. They spent all their money on the recall. (Cymbal crash.)

It has come to this: The hard left that propelled the Wisconsin recall movement has become the punch line of a bad joke.

The great thing is, our prog-lib acquaintances keep writing their own material! Revenge may be a dinner best served cold but laughter is the best medicine!

“These moles pretended to be Democrats, liberals, and progressives while in fact they were working for us – intentionally making fools of themselves and the Democratic Party in order to make Tom Barrett look bad,” the merry prankster tells us.

“Our most effective mole was Democratic Party of Wisconsin official spokesman Graeme Zielinski, who we had deliver outlandish and often nonsensical attacks against Scott Walker on a daily basis – accusing him of being a pedophile, of being an adulterer, of stealing money from military veterans, et cetera. …

More on the Dem Spokesmouth, anon.

“… by ordering [John] Nichols to focus [The Capital Times’] efforts on insane conspiracy theories like ALEC, the Koch Brothers and faked moon landings (okay, we made one of those up), and asking him to openly beg for campaign donations for Democrats on Twitter, we successfully turned that ‘newspaper’ into a national laughingstock.” 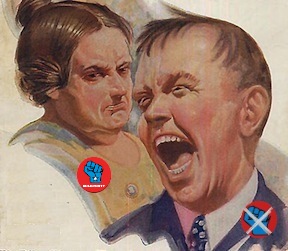 James Taranto of The Wall Street Journal has discovered the joys of the MSNBC line-up of comedy-variety shows.

“Last night we got home from a dinner and discovered something wonderful when we switched on the television. There's an entire cable network called MSNBC devoted to the entertainment of conservatives. Apparently all they have on this station is disconsolate lefties 24/7. We assume it's part of the Fox empire. Roger Ailes is a genius, isn't he?”

Or should we say, “MSN B Sad”? You know your schtick is side-splitting funny when the left-tending Jon Stewart’s Daily Show mines comedic gold from the Wisconsin recall. 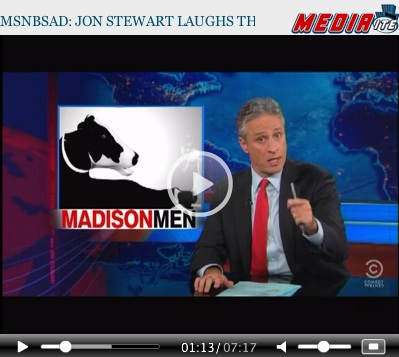 The Comedy Central studio audience tittered at the June 6 segment that showed MSNBC’s Mr. Ed looking like he had just swallowed his microphone as he was forced to announce that the hated Scott Walker had just beaten back the recall. “I don’t believe it,” Mr. Ed sputtered, as he reported his own network’s projection.

That was just the warm-up act for the third of the stooges, Lawrence O’Donnell. Looking directly into the camera, serious as a heart attack, the MSNBC host announced “The Big Winner in Wisconsin is” (pause for dramatic effect) “Barack Obama.” The live audience at The Daily Show just roared!

Stewart’s “Mad(ison) Men” segment then ran some truly disturbing clips from three completely unhinged Madison protesters, the first of whom appears to be the Marxist historian and historic Marxist Allen Ruff. So much for “Wisconsin Nice,” the segment concluded. 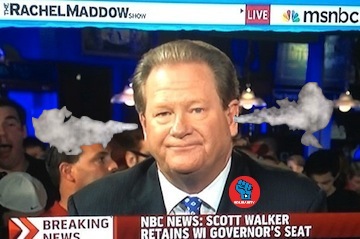 Laughter is the best medicine

What defeat? Reporting from NutRoots Nation, that progressive pixie Ms. Emily Mills reveals: “The reason the uprising worked, the reason we had this sustained occupation of the capitol building … was because …"

The uprising worked? Cue the canned laugh track. Well, I suppose the Hindenburg worked up to a point.

Two days after the cabal of Progs, Dems, and Big Labor dragged Wisconsin through the Siege of the Capitol and two summers of divisive recall elections, The Capital Times, as churlish as ever, accuses Scott Walker of “wasting more time and energy on something other than creating jobs or uniting Wisconsin.” (“Time for Walker to move forward.”)

What, Walker called this worthless recall on himself? Waksman, call off your fiendish Young Republican double agents! You’re killing me!

Credit where it is due. One leftist outlet, at least, has a sense of humor about itself. That would be Madison weekly Isthmus. Thursday’s cover was dominated by a photo of Scott Walker above the legend: “Him Again!”

More on Democratic Party of Wisconsin spokesmouth and self-confessed American-flag burner Graeme Zielinski. Now, he’s throwing disfavored news reporters out of the party’s state wake/cum convention this weekend in Appleton. (On the beat: “This is what the Dem-o-cratic Party looks like.”)

Just imagine the mainstream news media hoo-ha if a Republican convention tossed John Nichols out on his ear (not that the Comrade would ever venture that close to reality).

The Spokesmouth is also dissing leftist bloggers at the NutRoots Nation. Even the leftist Dane 101 marvels, “Is this the way you expect a communications director to behave?”

The movement to oust Graeme Zielinski is up on Facebook. The Squire of the Stately Manor will not sign. He sides with the Divine Miss Vicki. Graeme has been good for Wisconsin, good for America, good for a laugh. Remember the lady approaching Marty McFly in the movie Back to the Future with the admonition, “SAVE the clock tower”? 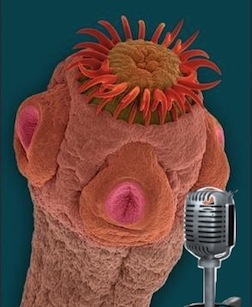 The tears of a clown

The Radio Slymer (shown above) wondered on-air what democracy looked like to conservatives. An over-the-road truck driver called in to suggest that Wisconsin had just witnessed it on Tuesday. He elucidated that people across Wisconsin were fatigued by the “antics” at the Siege of the Capitol. The Slymer parried with this witty riposte: “SCREW YOU!”

What a card! Truly, the Fred Allen of the Left is the gift that keeps on giving.

What, there’s another election on the horizon? Shirley (Abrahamson), you’re joking! (And don’t call me Shirley.) Something tells me the Wisconsin airwaves and coaxial cables will thrum with images of Tammy Baldwin at the Siege of the Capitol, arm in arm with Jesse Jackson. (Roll ‘em, Lester!)

(Again, on the beat: “This is what the Democrats’ senate candidate looks like.”)