A letter to Farmer Brenda and those who pay the bills

There is no more loved man in journalism today than my old boss, Dave Zweifel, editor emeritus of Madison’s Capital Times. He certainly put up with this blogger’s eccentricities back in the day.

Dave is just a nice guy but sometimes I think he really believes some of the things he writes.

In a recent column on The Cap Times website he recounts an e-mail from a farm woman (would I say “farm man”?) who pays a $10,000 deductible on her family's health insurance, gets no vacation or sick days, and is worn down by the physical toll of 19 years of farming. The farmer, named Brenda, wonders why she doesn’t just chuck it all and get a government job with its still-generous benefit packages, so they can retire to Arizona like so many of their government employee acquaintances.

“It seems the only ones who are weathering this depression are the ones at the public trough,” she writes.

Can we agree on one thing: Brenda the farmer and people like her are the people paying the bills. Unless you believe that government employees pay their own salaries, in which case, please proceed to the funny pages.

Instead of confronting Brenda’s issues or refuting them one by one, Dave Zweifel blames “Scott Walker’s demonization of public workers.”

“Brenda’s email underscores how successful the right-wing in America has been at turning working people against each other.”

It’s amazing how those of us in the Great Right Wing Conspiracy can get people to hate the guy who picks up their garbage or guards dangerous prisoners but, somehow, we did it.

My response to farmer Brenda:

Dear Brenda. Please excuse Dave Zweifel’s column. He is truly a wonderful man who, somehow, drank the Kool Aid that bubbles up from the fountain on the UW Library Mall.

But you are barking up the wrong tree. The Capital Times subscribes to the Progressive political faith — people like John Nichols, Jesse Jackson, Michael Moore, John Matthews, and Dennis Kucinich are their heroes.

No news outlet in America is as pro-union as the non-union Capital Times. (Perhaps there is an inverse relationship.)

Zweifel’s column implies that you are the clueless tool of nefarious forces – that you are a dope who has been duped. I give you more credit than that.

I know a little bit about farming, having grown up on a farm myself while various relations continued in that enterprise. I spent half my working career in the private sector, in newspapers, including The Capital Times.

The other half of my working career was spent in state government.

As a farmer, you are an entrepreneur. You invest capital into seed, livestock, land and machinery. To such risk you add considerable labor – usually your own and without overtime pay – you hope to reap a profit. On such values America was built.

I just had lunch with a friend who is self-employed. He pays 100% of his health insurance. As you know, state government employees now must contribute 12.6% of the cost. That is half of the average employee contribution in the private sector.

• That got me to wondering how much do employees of Capital Newspapers contribute to both health care and pensions. I asked Dave Zweifel but he won’t tell me.

• I know firsthand that the company discontinued offering a defined benefits pension decades ago and replaced it with an employee-funded 401(k) savings account; the newspapers matched up to 5 percent of the employee’s salary, then discontinued the match due to the downturn in the newspaper industry. I believe they are matching again. As you know, Scott Walker is requiring the employee pay the half of his retirement pension match – previously, the state paid the whole thing.

• Two of my acquaintances asked to use my name as a job reference (a sure indication of their desperation!) They’ve been out of work for six months.

The Capital Times and Capital Newspapers have laid off scores of employees, too. Hey, we’re in a recession and newspapers are having trouble making ends meet.

Government is no different. But Scott Walker has not laid off any state employees and, thanks to his reforms, few school districts have needed to resort to layoffs, either. To those who say government should raise taxes, I say let the newspapers raise their prices. Or are they blaming their employees for the economic downturn?

• As you also know, Governor Walker kept your farm property taxes down. The statewide average increase was less than 1% – the lowest increase in 12 years. That keeps more in your pockets for such expenses as health care.

Here’s hoping, Brenda, that you have good weather, good prices, and a good harvest in 2012!

Recall the governor (of Illinois)

Recall the Mayor (of Chicago)!

Heeding Chicago Mayor Rahm Emmanuel’s directive, his hand-picked Board of Education is:

• Firing the teachers in 10 more schools

• Turning six of the schools over to the Academy for Urban School Leadership, a charter school operator.

The moves affect 600 teachers. The union is opposed. Chicago’s schools graduate only half its students.

“Mr. Emanuel is part of a growing list of Democratic mayors, including those in Cleveland, Newark, an Providence pushing policies anathema to unions,” the Wall Street Journal reports.

When he was in the White House and the bailout of the Detroit automakers was being discussed, Emanuel was asked, What about the unions? His counsel – I cannot quote it directly here – was to “F-bomb the unions.”

Might be worth $400 just to see how the Chicago mayor is received at a fundraiser in Milwaukee for Mayor Tom Barrett on March 28. It’s sure to be, um, gala! 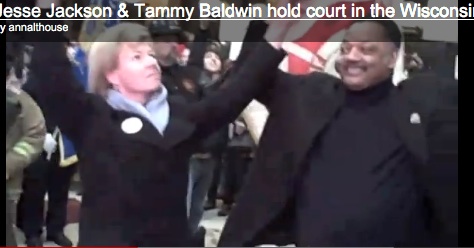 Reliving the Days of Rage

Ann of Althouse has been daily reliving the Siege of the Capitol as it occurred exactly one year ago. She shares New Media Meade’s video of Tammy Baldwin side-by-side with “The Rev” his own self, Jesse Jackson. See it here, see it now. A random thought occurs: why do I think all of Wisconsin will be seeing snippets of this video in this year’s U.S. Senate campaign. Anyone, class?

Christian Schneider suggests that Democrats, looking ahead to the recall election, are lining up against the mining bill to deny Scott Walker a legislative victory and to derail his job creation efforts. But Milwaukee is home to two manufacturers of mining equipment.

I say Bring It! Dare Bob Jauch to vote against the Assembly’s mining bill – he will do so at peril of his senate seat. And to hell with Dale Schultz. Add this to the equation: Tim Carpenter, representing a south Milwaukee district replete with employees of those two manufacturers, may bolt the Democrats to vote for the bill. That would further isolate Jauch.