A colloquy on school choice and government coercion with Ed Hughes

Ed Hughes is one of the more thoughtful liberals in town. We’re lucky to have him on the Madison school board if for no other reason that the alternative could be much worse. There are many more like Marj Passman out there, folks!

Mr. Hughes has posted a lengthy post at his must-read blog defending the public school monopoly. Did I say “lengthy”? It is a filibuster. You may read it in its entirety. Or keep reading Blaska’s Bring It! (all-natural ingredients!) for my riposte, his response, and my counter to that response. You don’t have to switch channels and it’s much more succinct.

Blaska ripostes: Ed, a very thoughtful post, as usual. Allow me to abbreviate for our friends with attention deficit disorder: “We have a monopoly on the educational tax dollar (unless you’re willing to ship your kids out of town – or move). We prefer to keep it.”

David – Yes, I believe that our public schools should be the recipients of our educational tax dollars. Here is why.

Madison’s public schools have no monopoly on K-12 education in Madison, of course. Students are free to attend parochial or other private schools, open enroll into public schools in neighboring school districts or into virtual schools, or be home schooled.

Madison’s public schools also don’t have a monopoly on governmental aid to K-12 schools. The property of parochial and other private schools is tax-exempt, which is a form of governmental support, and students in the schools also get some assistance with respect to transportation and special education services.

Article X, section 3 of the Wisconsin constitution states that “the legislature shall provide by law for the establishment of district schools, which shall be as nearly uniform as practicable; and such schools shall be free and without charge for tuition to all children between the ages of 4 and 20 years; and no sectarian instruction shall be allowed therein. . . .” Consistent with this constitutional requirement, the legislature has established requirements for public schools under the direction of locally elected school boards.

Within the limits established by state and federal law, local school boards establish and operate local K-12 schools and impose property taxes on their constituents to pay for that portion of the costs of the schools that remains after state and federal aid is accounted for.

Sure, parents who send their children to parochial schools would be happy to see their tuition go down if voucher revenue is directed their way. I’m sure that there are also students enrolled in our Madison public schools who would prefer to attend private or parochial schools if it were more affordable for them.

But there is no legitimate public policy reason to cater to individual parents’ wishes on this. We shouldn’t subsidize the alternatives chosen by individual citizens who opt-out of the public services made available to them. If someone doesn’t like hunting in state parks or thinks campgrounds are too noisy, we don’t send them vouchers to let them stay in private campgrounds. If groups of citizens are unhappy with their local police departments for some reason, we don’t send them private security firm vouchers. If some folks don’t like the choice of books at their local library, we don’t send them vouchers in the form of Amazon.com gift certificates.

There is even less reason to send vouchers to folks who want to opt-out of our public schools, since having all neighborhood children attending their local schools so that they can learn with and from each other is a positive social good.

There is no sound public policy justification for vouchers. The only plausible argument for them depends upon a truly failing public school system, where vouchers can be seen as a form of triage intended to provide better opportunities for students who truly are trapped in bad schools. Whatever one thinks of Milwaukee, that rationale is simply inapplicable elsewhere in our state.

But because it is their only card to play, the voucher advocates are off on their campaign to paint the schools in Madison, Green Bay, Beloit and Kenosha as failing, regardless of what the facts are. As one who has devoted lots and lots of hours toward addressing the genuine challenges our Madison schools face, I find the corrosive and destructive cynicism evident in that strategy particularly offensive. 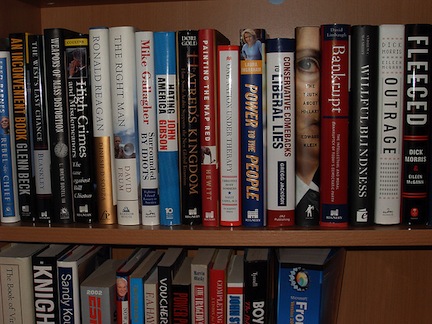 Love that Voodoo that you do! Ed: A strong argument – but your client is still guilty, and unrepentant.

Your argument founders on this central statement: “There is no legitimate public policy reason to cater to individual parents’ wishes …”

I’d love to see that as your campaign slogan when you seek re-election!

The entire economic and political history of our great experiment is to increase individual decision-making, not decrease it. America stands for greater choice, not lesser choice. In that way, you have taken sides with the one-party states where elites on both extremes of the political spectrum determine the choices.

A few well-placed gatekeepers at the three major networks once determined what news and entertainment programming the public would see. No more, thanks to cable and satellite, whose content goes unregulated by the federal government. The Internet permits blogs such as yours and mine to reach a greater public than a daily newspaper editor who could refuse to publish our maunderings.

Remember the FCC’s Fairness Doctrine? It killed off the presidential debates until repealed. The deregulation of the airlines has brought competition and lower prices. It was thought (I hope it’s not past tense) that one could choose his health care provider.

In education, certainly the G.I. Bill revolutionized American society; its beneficiaries could take their vouchers to the Jesuits at Marquette or to the socialists at the University of Wisconsin. The same for Pell Grants.

I am ruling as out of order your assertion that Madison’s public schools don’t have a monopoly on governmental aid. Yes, the city maintains Monroe Street as it passes by Edgewood High School just as it does Gammon past Memorial H.S. (BTW: No. 1 son attended both!) Yes, the police department will endeavor to keep both places safe. (Nice try.)

A more apt comparison is having to pay Microsoft even if you choose Apple. Nice business model!

Nor do I accept your examples of hunting and camping. Those activities are paid for by the users and are self-supporting. They pay nothing to the state if they choose a private campground or game farm. In the same way, the gasoline tax, driver’s and vehicle licensing fees are meant to pay for our road system (although I see where Gov. Walker wants to borrow from the general fund). You don’t play, you don’t pay.

Nor does the Constitution, from what you have cited, prohibit private school vouchers. As you are undoubtedly aware, the U.S. Supreme Court upheld vouchers in Zelman v. Simmons-Harris (2002). As did the Wisconsin Supreme Court in 1998, in a 4-2 decision.

(I’ll make another point here that I did not make in response to Ed’s blog. He writes, “the only plausible argument for [vouchers] depends upon a truly failing public school system, where vouchers can be seen as a form of triage …. Whatever one thinks of Milwaukee, that rationale is simply inapplicable elsewhere in our state.” I would argue that rationale is completely applicable to Madison. Just ask the Madison Urban League.)

In the current proposed expansion of school choice, Sen. Ellis has proposed public referenda at each school district. Let’s think this through. If a school district voted 99 to 1 against vouchers, what is the harm caused by that one family exercising a different choice? If the vote is 50 to 49 against vouchers, why would you deny the 49 their choice?

Public schools are not an end in themselves; they are a means to an end. Where they are strong, they will prevail. Where not, they lose market share or get busy improving. Why are you so fearful about the decisions Madison parents would make? Let’s have some faith in the virtues of a competitive marketplace. As for local control, can we agree that no control is more local than the kitchen table?