Back in the ’80s, my friends and I used to stop at Paul’s Club on State Street from time to time, usually toward the end of a night spent scarfing Parthenon gyros and quaffing cheap lagers at The Pub or The Red Shed or some similarly rustic watering hole. The club lay near the edge of civilization as we knew it — i.e., the tight configuration of campus-area taverns that served as the backdrop for our carefree, car-free Friday nights.

So when a PR person for Berghoff recently reached out to me with an invitation for a Friday launch party at Paul’s, I was doubly curious. “What’s Paul’s like now?” I wondered. “And when, exactly, was the last time I had a Berghoff beer?”

Well, it turns out Paul’s Club is a lot different than I remember. For one thing, it moved a few doors down last year. The famous oak tree is still the pub’s focal point, but the bar and the seating areas have mysteriously switched places. And it seems quite a bit larger than it used to be. (Or maybe my horizons have simply expanded.)

And Berghoff beer? Not how I remember it either.

That’s exactly the reaction the folks at Berghoff are hoping for, of course. The party, which served as an introduction to beer lovers of Berghoff’s revitalized beer lineup, was a revelation of sorts. While the college student in me most appreciated the “free beer” part of the program, I found that I really enjoyed several of Berghoff’s new offerings.

Most surprising was its Reppin’ Red. I’ve never been a big fan of red beers, but as an esteemed representative of the fourth estate, I figured it was my professional duty to give it a taste. I’m glad I did. It had a unique, slightly hoppy flavor (perhaps a nod to recent trends), but the hops didn’t overpower the brew, and it turned out to be my favorite of the bunch.

I tried every Berghoff brew on tap (Paul’s was either out of or not offering the Oktoberfest and the Winter Ale) and for the most part came away happy.

Of course, Berghoff is walking a fairly thin tightrope, marketing-wise. The 120-year-old Chicago company has a storied history and has put down deep roots in Wisconsin. It was the first beer to be brewed and served in Chicago after the repeal of prohibition, and in 1960, production moved to Monroe, Wis., where it stayed until recently. Now, its reformulated beers are brewed in Stevens Point. But as craft beers have begun to see an unprecedented surge in popularity, the fortunes of more traditional brands have flagged.

Still, this is more than just a marketing push. Owner Ben Minkoff, whose family owns General Beverage Distributors, which purchased the Berghoff Brand in 1994, consulted with brewing experts Randy Mosher and John Hannafan to revitalize both the beers and the brand. With the craft beer craze in full flower, Minkoff determined that Berghoff needed a shot in the arm but could also capitalize on its decades of tradition. It could hop on the craft bandwagon while remaining true to its history, and there needn’t be any conflict.

After all, “Berghoff was craft before the crafts,” Minkoff said.

As for the marketing challenge it faces, Berghoff seems keenly aware that it’s straddling two worlds.

At the launch event, a glossy handout bore this witticism: “For more than a century, Berghoff Beer has quenched the thirst of those who tilled the earth, rolled the steel and coded the web pages of America’s Heartland.”

Nicely played. And very droll. But the beer will ultimately be the selling point. I’d say it’s off to a pretty decent start.

Rolling out the (big) tank

Just a couple tantalizing tidbits from Wisconsin Brewing Co.: The brewery is slated to open on Nov. 1, and the pieces are falling into place. Pictured below is WBC President Carl Nolen with a 9,300-gallon tank, the largest of the vessels that will go into the WBC brewhouse.

“These brewing vessels are very a big deal on so many levels,” said WBC brewmaster Kirby Nelson, in a press release. “We’re gonna have a brewery that sets standards and I cannot wait until I get to fire up the kettles and begin to brew.”

Wisconsin Brewing Co. is currently testing out some of its beers at Vintage Brewing Co. and The Great Dane Pub & Brewing, and I had a chance to try its #003 Porter on Sunday. Not only can you beta-test this flavorful brew your own self, you can also share your feedback on WBC’s Facebook page.

When will you have a better chance to get an up-close look at brewing history in the making? 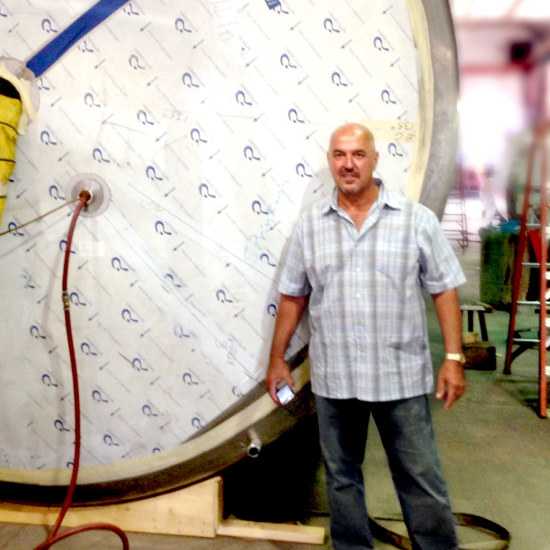